Breaking Down Silos in Public Safety

We sat down with Commander Ana Lalley and Battalion Chief Richard Carter from Elgin, IL, to learn how they improved relations their public safety agencies.

When a gunman opened fire at J.B.’s pub in Elgin, IL, killing two people and injuring 21 more, the Elgin police and fire departments found themselves scrambling to respond quickly and protect their community.

Sixteen years later, the two departments view the incident from 2001 as a wake-up call revealing several areas where they could have done better.

“We handled the situation to the best of our ability, but we recognized at that point we weren’t really ready for something like that,” said Battalion Chief Rich Carter of the Elgin Fire Department.

In the years since, the police and fire departments have made a concerted effort to improve communication and collaboration between their agencies, which has created a unique situation in Elgin.

We sat down with Commander Ana Lalley of the Elgin P.D. and Battalion Chief Richard Carter of the Elgin Fire Department to hear about how they improved their relationship and broke down the silos that can occur among public safety agencies.

It Starts at the Top

Finding ways to work together doesn’t come naturally for most fire and police departments. Battalion Chief Carter admits that there can often be an atmosphere of competition among agencies.

“Most firefighters are Type-A personalities and somewhat aggressive in their beliefs,” he said. “Anytime you put those personalities together; you would expect some conflict.”

However, it was the Chief of Police and Fire Chief who made it a priority to work together, starting with the command staff.

The two departments agreed to get together for regular breakfast meetings to discuss issues facing the city and their agencies.

“We all want the best for our teams,” Commander Lalley said. “If we get along as a command staff, it will filter down to the front line.”

The primary purpose of these meetings is to focus on relationship and trust building, but they also share upcoming events requiring collaboration. This way, they can be as prepared as possible to serve the community together.

Lalley believes agency leaders working together has been crucial in enhancing overall operations.

“What really gets the work done is personal relationships,” Lalley said. “We have great influence on the front-line people. The philosophy matters, but the people carry it out take it to the next level. Now, everyone has a good, positive feeling that we want to make this city as great as we can.” 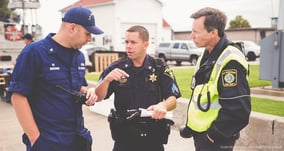 Increased communication has been mutually beneficial for both departments in Elgin.

They learn to work better together and how to overcome obstacles so they can serve side by side more effectively. But the effects of breaking down silos have been more profound than that.

Both the fire and police departments have noticed their partnership benefits the entire community.

Because both departments respond to the same scenes frequently, it’s crucial for them to be on the same page.

Working in the context of trusting relationships means faster, smoother responses and generally safer communities. Only when officers and firefighters know how the other work can they support one another when it matters most.

Cooperation not only increases safety, but also increases efficiency.

“It saves money for the citizens when you have organizations that work tightly together – you’re getting the best bang for your buck. That’s what communities care about,” he said.

Lalley and Carter have noticed that responding to safety issues together becomes much easier when they train together.

Because fire and police departments often respond to these situations, it’s important they draw from the same well of knowledge. This way, they can rely upon one another in fast-paced crime or fire scenes.

“When we end up in violent situations, we rely 100% on police to get there before us to calm the situation down so it’s safe for our guys, since we don’t carry any self-defense tools. They help us find residents so we can talk to them, and they black out the area to keep people from coming into disrupt our scene,” Carter said. 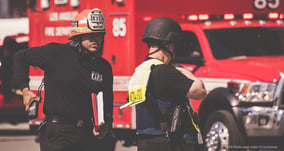 After the Columbine shooting in Colorado, many victims died because first responders could not stop the bleeding quickly enough. When departments train together and plan ahead for scenarios like this, they can get to victims and alleviate the situation as quickly as possible, supporting one another along the way.

Open lines of communication have also helped Elgin law enforcement to better manage large-scale events, which have potential to impact the community.

At their annual Halloween event and city-wide concert series, for example, they have a joint-command center so they can more easily collaborate.

Of course, Commander Lalley said working together at these events is more efficient from a personnel perspective.

“We come up with an incident action plan and an emergency-response plan, working together to be on the same page. We get the best bang for our buck with our personnel that way,” she said.

But working together also helps the two departments make decisions together on how to respond, ensuring safety for everyone.

Pool your resources for new technologies

Because of their close working relationship, the police and fire departments were able to join together topurchase a drone shared by their departments.

Lalley said that when they both realized they were in the market for a drone – though for different reasons – they decided to pool their resources.

“We decided to get our drone program up and running, but in the meantime, the fire department was working on its drone program. We connected knowing it makes more sense to work together, especially since we work on a lot of city initiatives together.”

From there, the fire and police departments went to a drone training together for licensing, and then they did a public forum together to engage the community.

Carter said that when implementing the drones, it was important to keep a collaborative approach. Since every community has different needs and opinions, it helps to present the drones together.

Their drone launch was successful for this reason.

“You can have great departments working together with great ideas, but your community may not be receptive,” he said. “Take the temperature in your community and establish what the needs are. Then, build personal relationships and reach out. Focus on relationships, not on which department gets the credit.”

Where to Start in Your Community

Like the City of Elgin, it may help to start small. All it takes it being intentional, whether you start regular breakfast meetings or pool resources for new technology.

Working side by side at events or planning new initiatives will give your departments an opportunity to ask questions and overcome obstacles. And as you work together and develop shared understanding, your department and your city will benefit.

Carter recommends focusing on working through issues, getting on the same page, and understanding each other’s roles.

“It’s all about building relationships. After starting small and being honest, we moved forward to build teams like we have now,” he said. “I truly believe that between our two departments, we can handle anything that happens in Elgin. By working together, we are fulfilling the promise we made when we took the oath 25 years ago.”

Following Policies and Procedures and Why It’s Important
Why it is important to review policies and procedures
What is a policy vs. a procedure?
Examples of Healthcare Policies