A fire department drug and alcohol policy will protect the department, its members, and the public.

If there's one watchword for firefighters, it's safety. Everything they do is about safety. From maintaining the equipment to regular training, it’s all about keeping firefighters safe on the job. Departmental policies are written with an eye toward safe and efficient operation. This includes a fire department drug and alcohol policy, which discusses the when, where, and what of alcohol and drug use.

There has been a rash of news stories about firefighters using drugs and alcohol while on duty. In July, the fire chief in Pigeon Forge, Tennessee was suspended for drinking an alcoholic beverage before responding to a fire. In Detroit, a battalion chief crashed his department SUV on the Lodge Freeway on his way to an incident. That happened a week after a Detroit firefighter crashed a rig into a parked car after drinking at a party.

In all cases, each department had a clear drug and alcohol policy, which stated when firefighters can and cannot drink, and whether they can use certain prescription medications.

But what about with new drug laws and allowances, like recreational and medical marijuana usage?

In Buffalo, New York, another firefighter is fighting to get his job back after being terminated for testing positive for marijuana, even though he is a certified medical marijuana patient.

This is one more in a growing number of cases where a departmental policy and a state law contradict, and departments have to deal with things like the collective bargaining agreement, which is the case in Buffalo.

There will continue to be drug and alcohol use issues among emergency responders, so you must have a clear fire department drug and alcohol policy. This will establish what is allowed and not allowed, and when people can drink alcohol or use prescription drugs. And it will detail the investigations and consequences that may result from a violation. With a clear policy, the department can protect itself if there's ever a need to discipline, suspend, or terminate a department member for a violation.

This article will discuss why you need a drug and alcohol policy, how to develop one, and will list a few examples of different cities' policies already in place.

Importance of a fire department drug and alcohol policy

We've already discussed the importance of health and safety when responding to calls. Firefighters should not be running into burning buildings, assisting at car accidents, or providing first aid while under the influence of drugs or alcohol. It not only puts the firefighters in danger, it endangers civilians when a firefighter is performing their duties while impaired. They could make a poor decision, take bigger risks, or be unable to operate the equipment safely. (The Detroit battalion chief and firefighter were each involved in an alcohol-related accident.)

Firefighters are also role models to the community. Thanks to TV and movies, firefighters are almost-mythic rescuers who run into burning buildings while everyone else runs out. Like it or not, people look up to firefighters as an example of bravery and heroism. It tarnishes the job and department when a firefighter is found with drugs or alcohol in their system.

That's why you need a fire department drug and alcohol policy that sets time limits as to when a firefighter can drink or use allowed drugs. Some departments (and the IAFC) recommend that no one may drink eight hours before a shift. Others, like the Enid (Oklahoma) Fire Department, set the limit at four hours. And still others, like the Scottsville (Virginia) Volunteer Fire Department only says that "all members will be free from the effects of drugs and alcohol while performing safety-sensitive functions."

For many firefighters, the firehouse functions as a second home, so the fire department drug and alcohol policy is particularly important. So important, in fact, that the IAFC strongly recommends that no alcohol be allowed in a firehouse or on a truck, even for transporting it for later use.

Your policy should take the best elements of the policies you have found, synthesize them, and make them apply to your own department's unique make-up and circumstances. It should follow your vision for how staff should behave, what should be allowed, and what discipline will be handed out for violations.

After completing the initial draft, send it out for review among key personnel for feedback. Ask for recommendations and reality checks. Run it past the city attorney and the union to see if they have any notes or suggestions. (They almost certainly will.)

As you make the revisions, be sure to track them with your policy management software, so people can look back at the history of the policy during its development and see what has changed. This includes your team providing feedback and edits when questions arise.

Once you have completed the final draft, send it off to departmental leadership for their approval. Afterward, send it out to all departmental members via your policy management software and ask them to read it and sign it. This step is often necessary for accreditation compliance or, at the very least, to satisfy your insurance company. This also helps you if a terminated member ever says they never received or read the policy: If you have their signature on this policy on file, they won't have a leg to stand on.

The actual fire department drug and alcohol policy should include several basic elements:

Every fire department's utmost concern is safety. The job is already hard enough when someone has full use of all their faculties and full concentration. Responding to a fire while drunk or high is a recipe for disaster, both for firefighters and the general public. A fire department needs a strong drug and alcohol policy to protect the department, its members, and the public.

PowerDMS has worked for years to help fire departments create and manage policies for uniforms, infectious diseases, and ride alongs. Learn about the seven policies your fire department should have in writing today. 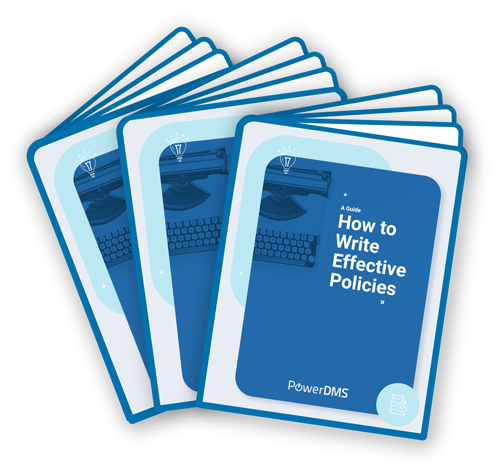 Write policies and procedures that better protect your department and staff with our free 12-page guide.